What is a Photogravure? 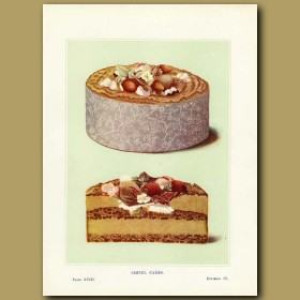 In the early 20th century, some superb artworks were produced using photogravure printing, including the fascinating magnified photographs of plants by Karl Blossfeldt.

Photogravure printing was invented in 1879 and the basic process is to photographically transfer an image to a metal plate, etch the image on the plate then print from it. Photogravure and gravure prints have warm blacks and a charming range of subtle shades of gray.

It is quite easy to identify a photogravure print. Look at the print with a good magnifying glass, and you will see a characteristic honeycomb appearance. This is caused by the grid used in the printing process. The image also appears soft and the dark areas seem pitted, as seen below. 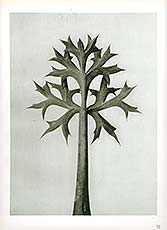 ... and in this magnified close up of a photogravure 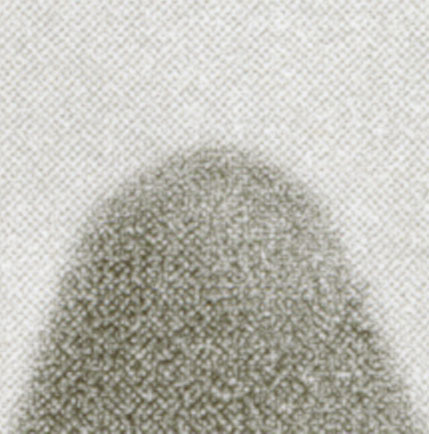 The images above are a photogravure by Karl Blossfeldt, and a portion of it magnified fifty times. Notice the characteristic honeycomb appearance.

Photogravure is rather a complex process with several variations, but the essence of it is as follows:

1. Photographically transfer the image to a metal plate

This is done by coating a plate with light sensitive gelatin and then exposing it to the light from a photographic image (imagine shining a slide on it). The gelatin hardens most where most light falls, and remains softest where no light falls. So, if the gelatin is exposed to a negative photographic image, the darkest areas of the image will remain softest. These correspond with the lightest areas in the original photo.

2. Lay an extremely fine metal grid on top of the metal plate

This grid remains flat and un-etched in the next step while the square openings can be etched down to different depths according to the hardness of the gelatin.

3. Etch the metal plate with acid

The acid eats away the softest gelatin fastest, so it eats deepest into the metal plate where the gelatin was softest i.e. where it was exposed to least light. So, if the image was a negative, the least light comes from the darkest areas. In the actual photo, these would correspond to the lightest areas.

Most ink goes into the deepest etched pockets, less into the shallowest. The plate is then wiped to remove surplus ink.

5. Press the printing plate onto paper.

The areas with most ink print darkest. In later years, this step was automated with machines, but in the early days it was done by hand.

If you are interested in photogravure prints, we highly recommend the ones by Karl Blossfeldt.

Nowadays, the process is undergoing something of a revival as computer and laser technology has driven down the cost of producing the metal printing plates. In fact, these machines have opened up many interesting, innovative uses for the process of photogravure, or photo etching as it sometimes called these days. 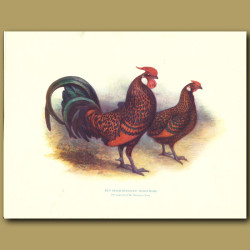 Red Black-Spangled Hamburghs
27 x 21 cm (10.5 x 8.25 inches).Antique photogravure of prize poultry, made in 1902 by Harrison Weir of England. Harrison Weir was one of the most not..
US$45.00
Add to Cart
Add to Wish List
Buy Now Ask Question 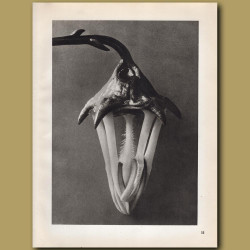 Campanula Vidalii (10x)
31 x 24 cm (12 x 9.5 inches)This vintage photogravure is by Karl Blossfeldt and is over 75 years old. Blossfeldt was a professor of design in Berlin a..
US$90.00
Add to Cart
Add to Wish List
Buy Now Ask Question 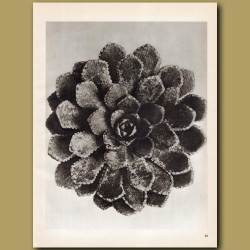 Saxifraga Aizoon (8x)
31 x 24 cm (12 x 9.5 inches)This vintage photogravure is by Karl Blossfeldt and is over 75 years old. Blossfeldt was a professor of design in Berlin a..
US$90.00
Add to Cart
Add to Wish List
Buy Now Ask Question 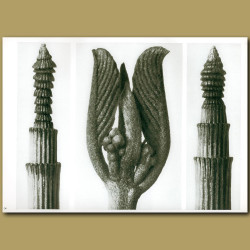 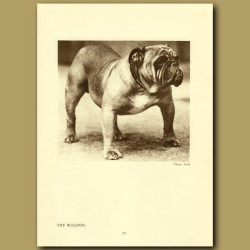 Hi Glenda, Good question ! It's a bit tricky to advise without seeing a photo of it. You get a feel for how old paper is after looking at antique prints for years so we can usually tell at a glance. One easy tip is if the margins on the paper are quite shiny and white it is likely to be relatively modern therefore more likely to be a reproduction. Another tip is to examine it with a very strong magnifier, and see if it has a similar pattern to the photo above - if it does it is more likely to be a vintage or antique print. All the best Peter P.S. We offer appraisals - see our Customer Service menu at the top.

I have what I believe is a signed original photograph by Hugo Brehme. Can you direct me to the best place for an appraisal? Thank you. Deborah

What can you advise me to do now ?
Janice

I have some old printing plates and it seems impossible to find information about them or the book. The top of the plates say munich, 1890 style. The back looks like steel and the front looks cooper. I hope you can help. Thank you for your time.

A good start is to google short bits of text on the plates (if there is any). Also, try searching for the image in Google Images using image search. Also, see our page for appraisals under our Customer Service menu, or athttp://www.finerareprints.com/valuation-of-antique-prints

Hi, came across your blogs while attempting research on prints marked F.A. Inc.; the only mention I found via Google was an antique prints.blogspot, evidently no longer active. I'm specifically researching a Ted Kautzky print; the information on your site tells me it's likely a photogravure by the aforementioned F.A. Inc. Any direction will be most appreciated! Best, Alan

Hi , I have what I believe is a complete set of James whistler prints , close to 400 prints done in what i believe is photo gravure I am not a art guy but would like to see this set saved .any ideas what I should do with it ? any help would be appreciated .

Hi Jason, they may be worth a bit depending on age, edition, condition, size etc. Suggest you send us a few photos.

I have 3 thick books from late 1800’s with antique photogravures in them. Well over 150 of them. The Masterpieces of Italian art. 100 Crowned Masterpieces of Paintings. Says Photogravures from the greatest modern paintings of all nations selected from the Public and Private galleries of Europe and America.Gebbie and Company. Published Philly Pa. The other book I have to dig out. Any help with value or any real special ones I should look for would be appreciated!! Thank you

Hi James, they're unlikely to be worth a massive amount but may have some wortwhile value. Googling the title may help track down any on sale to give you an idea. We offer appraisals - see our Customer Service menu, or http://www.finerareprints.com/valuation-of-antique-prints

We have a original E.W.Savory 24 photogravure views of bombay from thackeray Ltd booksellers of bombay in original folder how can I find out if it is worth anything.

Hi,
I recently acquired (at auction) what is purported to be an original pastel and watercolor portrait of a Scottie by C.C. Hendee (link below). I have yet to receive it but since the only other piece of work I have found by the British artist is a photogravure I was wondering if this too was likely to be an antique print. I was interested in getting an evaluation but am not even sure if it is a print or not! Do you also do appraisals of original works?
https://www.liveauctioneers.com/item/75244629_c-c-hendee-scottie-dog-painting?utm_source=LA_Transactional&utm_medium=email&utm_content=itemwon&utm_campaign=Trigger%20-%20You%27ve%20Won

Thanks so much
Tanya

What is the difference between applying gelatin and dichromate solution onto the copper plate from the beggining and making the gelatine tissue sensitized and after exposing the image stick it to to copper plate? Is the first option not doable? Thanks!!