What Is An Engraving ? 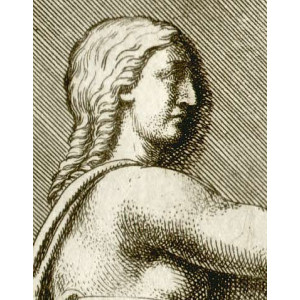 An engraving is a print made using an engraved printing plate

In printing, to engrave means to carve a pattern in a printing plate. The engraved pattern retains the ink used to print the image.
The earliest known dated engraving is from 1446, so the technique is at least 560 years old.
The basic process is to engrave the image on a metal plate, apply ink to the plate, wipe it so the ink only remains in the engraved lines, then press it onto paper to produce a print of the image.
Using engraving, an artist can make either highly detailed images or images with a sketchy quality, depending on the number and thickness of the engraving lines.
The image below is an engraving from 1693 by Pietro Santi Bartoli magnified fifty times. Notice the variation in thickness and angle of lines - this engraver was an exceptional artist and craftsman. 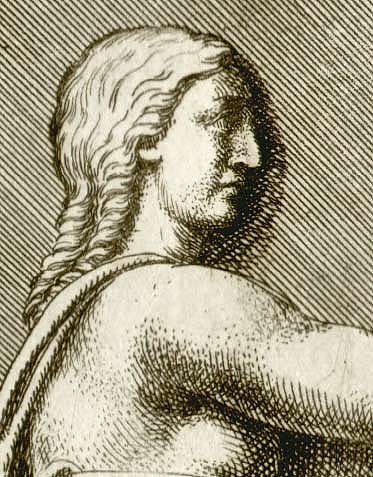 Engraving has several variations, but the essence of it is as follows:

1. Choose the material for the printing plate

The most common materials used when antique prints were made were wood, copper and steel:

2. Cut the image into the printing plate

In an engraving, each image is made up of hundreds of engraved lines. The engraved lines are carved with an engraving tool called a burin. The burin is a very fine chisel with a sharp V-shaped section. The engraver holds the burin almost parallel with the plate then pushes its point into the plate and carefully guides it along, carving out a groove. This is what engraving tools look like: 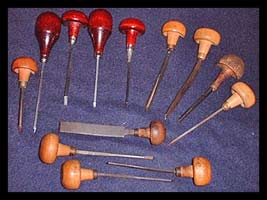 Engraved lines tend to be pointed at each end. This is caused by the burin being pushed down into the plate at the beginning of the line, and pulled up at the end of the line. This helps us distinguish engravings from etchings.

3. Apply ink to the plate

Ink is spread onto the plate, then the plate is carefully wiped clean leaving only the ink held in the engraved lines. Most ink goes into the deepest lines.

4. Press the printing plate onto paper

The plate is laid on the printing press. Dampened paper is laid over the plate, and padding is laid on top of the paper. The rollers on the press force the paper onto the engraved plate, printing the image onto the paper.

5. Hand color the engraving if desired

Colored engravings were virtually always colored by hand with water colors. This is an art and itself and will be the subject of another article when we have time to write it !

Engraving was a very time consuming and skillful technique, eventually superceded by more economical lithography and photogravure. Nowadays, the technique of engraving is undergoing something of a revival thanks to amazing computer controlled laser engraving machines which have become affordable for the small business market.

If you are interested in engraved antique prints, we highly recommend:

I recently went to an exhibit that the history department at my school library did where they had engraving plates on display. I can't remember how old the plates were, but it baffles me how intricate the engravings were. I am curious though, why is it that lines can be engraved closer on steel than on copper. I wouldn't think it should make a difference.

Hi Ian, Steel is much harder than copper. This meant finer engraved lines could be used on steel and they could be closer together. If such fine lines had been used on copper they would have become worn out sooner, resulting in blurred or missing lines. A similar everyday example is that old copper coins get quite smooth over the years in comparison to steel based ones.

I hope you could help me with a little insight here. i just won an auction item that i am completely satisfied with. but i want to understand it more. here is a link to it:

was this item made in 1661 by Andreas Cellarius or is it a copy of his work - when was it made? do you think it was valued appropriately - too high or low??

Thank you so much,
Angela

Hi Angela, That looks pretty good. I've sent you an email. If you'd like us to take a detailed look please click Customer Service in top menu and select Appraisals for more details. All the best Peter

It's interesting to learn some of the history behind engravings. I didn't know that the earliest known dated engraving is from 1446. It's easy to see how people have been perfecting the art of engraving since it's over 560 years old. Thanks for sharing this!

I have I believe an old engraving on laid paper. Artist name is illegible. The title is The George Inn Salisbury. It as deep plate impressions. Corner of plate in impression is 1 fluer de li in a square.

But i cannot tell what era. When a flashlight is put to the engraved image. There are tons or hundreds speckled of silver within the image. What would that be? It is a hand watercolored engraved image.

Hi Jacqueline, They might have used an iridescent water color to give it the shimmering look. These paints had little specks of metal or pearl in them. If it has deep plate impressions its likely to be old and a copper plate engraving. Kind regards

Hi John, Wood is still used for engraving by some artists these days. Its advantage is it is easier to cut the engraving lines in than metail is. The lines end up wider though, so wood engravings generally have a more simplistic look. Kind regards Fine Rare Prints

Hi:
I have in my possession a set of 50 engraved prints done in the
mid 1800's . The set is in a Binder labeled "The Gallery of British Art."
Published by D. Appleton & Co. New York. I obtained this collection of
prints at an estate sale from a Victorian Home here in Murfreesboro, Tennessee.
The family has been in the home since early 1800's.
The set contained 50 engraved prints (size 11" x 15" on Thick White Stock.
These had been in their attic for a long, long time.
The condition of them is excellent but some have some moister spots on
the edges. Each print has a separate sheet (same stock as Print) with a story
about the subject of the painting it was copied from. Each painting has a title
of the Painting along with each painter's name and also the name of the
engraver. I have not yet had these appraised... but have an interested buyer.
don't know what they are worth. Even the slip sheet between print and story are
intact.
The set was a series of prints that were sent once a week or month until all
prints were exhausted. Each print was 50 cents per print.
It is remarkable the details in these prints and the time frame it must have
taken for the engravings to be made.
If you have any ideas on the value of this set of prints...please let me know.
Thanks,
Bill Bickford

Hi Bill,
Your engravings sound great - a nice size and likely to be interesting subject matter. We'd have to see some photos to help yo with value. Please go to http://www.finerareprints.com/valuation-of-antique-prints to find out more.
All the best
Fine Rare Prints

I recently purchased an engraving from an estate sale.
On the back it says circa 1839, original engraving Egypt The Rising of the Waters of the Nile;
The tag is P525/1, 226 PG Old Prings;, SFS_ and a handwritten P525/1.

Sounds great Ann. Prints about Egypt have eduring popularity as it fascinates many people.

Hello - I have a etching by Murray of Lichfield Cathedral in England. It was published by the Churchman Co of New York in 1904. It has a solid 3 inch oak frame that has acid free rag matting with a dust cover. I have owned this etching for about 35 to 40 yrs. I would like to sell this lovely etching and am looking to see what it is currently worth. T Thank you for time and hope to hear back from you.

Hya ive recently come across a picture of the village festival by David teniers 1645 ish and it is very dirty a bit tyred and would need some restoration. But the detail is amazing. I'm a lorry driver so I haven't got a clue what to do next. And advice would be appreciated. John.

I am the steward of an original steel engraving entitled, "Le Chant du Rossignol" by Alphonse Martinet, in the original frame. It has not been touched. It is stunning. Is there a venue where many might enjoy this piece other than a private collection? That would be the only easy way to part with something so magnificent. Either way, please email with comment at your convenience.

Hello- I have a complete set of The "New Discoveries " of Stradanus that I bought from a Library sale in Mississippi. It's in excellent condition from 1580's

I would like to know how an engraving is made from a painting. Does the engraver copy the original, and if, for example, the painting is much larger how does he or she get the proportions correct, is it purely by eye or is some kind of ‘camera’ used? I appreciate this is not a comment but I have been unable to find the answer and thought you might be able to explain the process of making an accurate reproduction albeit in black and white. Thank you for your time. E Masters