What Is An Antique Print? 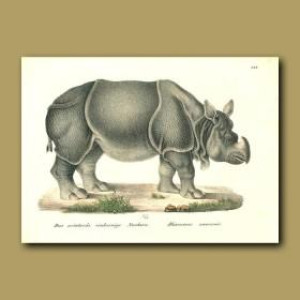 An antique print is one that was made more than one hundred years ago.

At top antique fairs we have attended, such as the Grosvenor House Antiques Fair in London, items must usually be at least 100 years old to be classed as antique. However, original prints made before about 1950 may be considered to be antique if they were not mass produced. In contrast, vintage prints are usually considered to be those made between 1950 to 1980.

Have you wondered when an antique print you've seen was made? Here are our tips for dating antique prints.
We would need to write a book to cover all the nuances, but these tips are a good starting point !

Here's an example showing a scene in ancient Rome. Click the picture to see more:

Here's an example of an engraving of a cougar from 1793. Click the picture to see more: 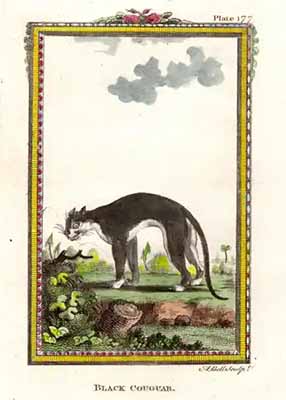 Here's an example of a hand coloured steel engraving from 1843. It shows masked people in The Marquesas islands. Click the picture to see more: 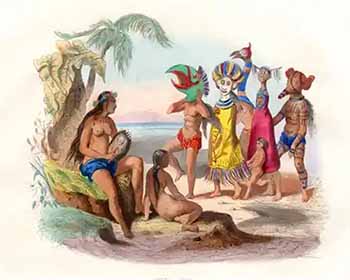 Here's an example of a chromolithograph of pears from the 1890s from John Wright's Fruit Grower's Guide. Click the picture to see more: 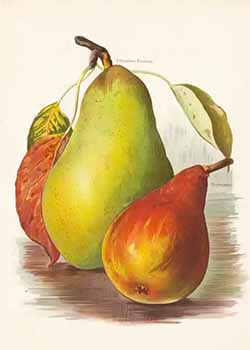 You can use the filters on this site to find prints by date.

I do estate sales but have come across several prints. One a lithograph. My client was in New Orleans in 70's in Catholic seminary. He purchased these from antique shop. I have civil war print. Think paper. Feels like raised lines. Also pen/ ink silks signed. Look German. Map of new Orleans in 1851. Algiers. Let me know if u can help. I've done appraisals for insurance and sales for 21 years but am baffled at these. Thanks.

Hi Maria, your prints sound intriguing but we'd need more details to help. Please go to our page for appraisals under our Customer Service menu, or paste this link into your browser http://www.finerareprints.com/valuation-of-antique-prints

Many years ago I bought this old black and white (discolored) etching. I've seen it on line it was named Arab horse Arabian falcon etching antique print by a Wesley Dennis Marquerite. I have a picture of it. I want to have it reframed.

I have been looking for information on dating prints for a while and this was really helpful! I believe what I have is a lithograph, mostly because of its speckled appearance. Now I'll have to do a little more research to see if it's from before or after 1850! Thanks!

How do I find the history and value of old framed prints I have?
Ex) Dutch hunting party with mountain goat.
Pharaoh's horses by herring

Hi Dan We can help. Please go to our page for appraisals under our Customer Service menu, or paste this link into your browser http://www.finerareprints.com/valuation-of-antique-prints

I found what I believe is an antique print entitled Journal Des Demoiselles it is dated Avril 1859 the artist appears to be Pauquet and the engraver A. Portier.
My question to you is: Do I have an antique print and what iis it's true value? On the back is a stamp Objects D'Art Ivanhoff's 2916 20 College Ave. Berkeley Cal. It has a black frame and measures 11.5 by 7.5 inches.
Thank for you taking the time to respond to my question.
Sincerely,
Sidney D. Harris

Hi Sidney, it sounds like an antique print.We have some from the Journal Des Demoiselles at http://www.finerareprints.com/journal-des-demoiselles-french-fashions Have a look at those to get an idea of retail value and if you need more assistance please go to our page for appraisals under our Customer Service menu, or paste this link into your browser http://www.finerareprints.com/valuation-of-antique-prints

I bought two etchings from antique shop on Portobello Road, London. They are from a old book, both are by Samuel Howitt with the plate marks on them.
One of them I know is called Jackdaw and the Ram the other not sure. Both are dated 1809, but does that mean they are that old? They appear very old
and my framer had problems getting them exactly level because the plates (and you can feel the indention of the plate) are not perfectly sized on the page.
I quess my question is how old are etchings with plate indention on them?

Hi Kim,
Well done! It sounds like you found a couple of good quality antique prints. Given your description, I'd expect them to have been made in 1809.
Prints with indentations on them (known as "plate marks"due to the printing plates are usually older engravings or etchings. Plate marks are more common on prints made before roughly 1830. After that, different printing techniques which did not result in plate marks (e.g. lithography) became more widely used. Few prints made after 1900 had plate marks.
If you're interested in knowing more about Samuel Howitt have a look at ours here:
https://www.finerareprints.com/samuel-howitt-antique-prints

Thank you so much for getting back with me so soon. I thought they might be that old, but was so excited to have your expert opinion. Thank you again.