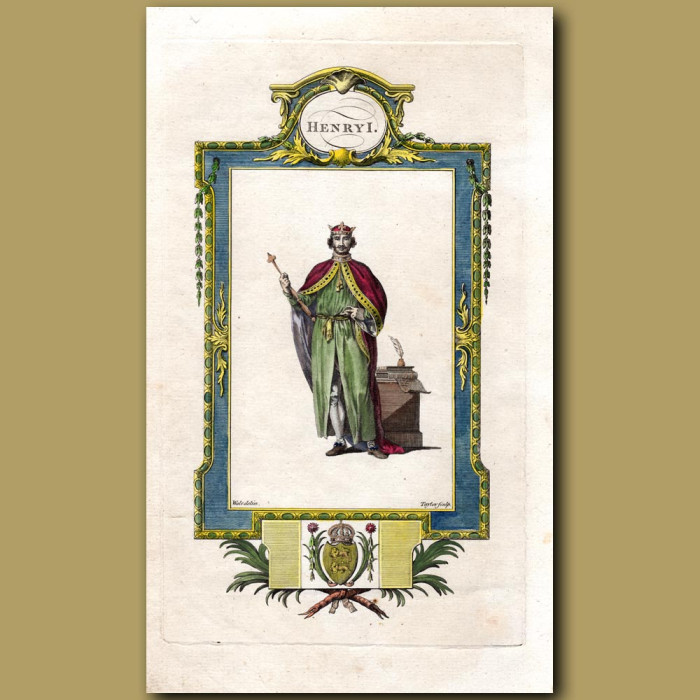 39 x 24 cm (15.25 x 9.5 inches)
This antique engraving was created in 1777 in London, England for William Augustus Russel's impressive work about the history of England. His work included famous scenes, portraits of royalty and ships.
It was made by copper plate engraving, has hand painted water colouring and well defined plate marks, is beautifully detailed and is on handmade, chain-linked paper. The engraving is on one side, the other side is blank. The paper has a lovely aged, creamy white patina. The border around the print is a little larger than shown. It is in good condition considering it is over 240 years old.
Henry I (1068-1135), also called Henry Beauclerc (meaning good scholar), was King of England. He ruled from 1100 until death. He was fourth son of William the Conqueror and Queen Matilda of Flanders. Henry was present when his brother William died in a hunting accident in 1100. His brother Robert was away on crusade. Henry rushed to seize the English throne. As King, Henry issued the Charter of Liberties, a predecessor of the Magna Carta. Henry fathered more illegitimate children than any other English King, 20 to 25! After his death, his daughter Mathilda and nephew, Stephen, argued over who would become ruler causing a civil war called The Anarchy.