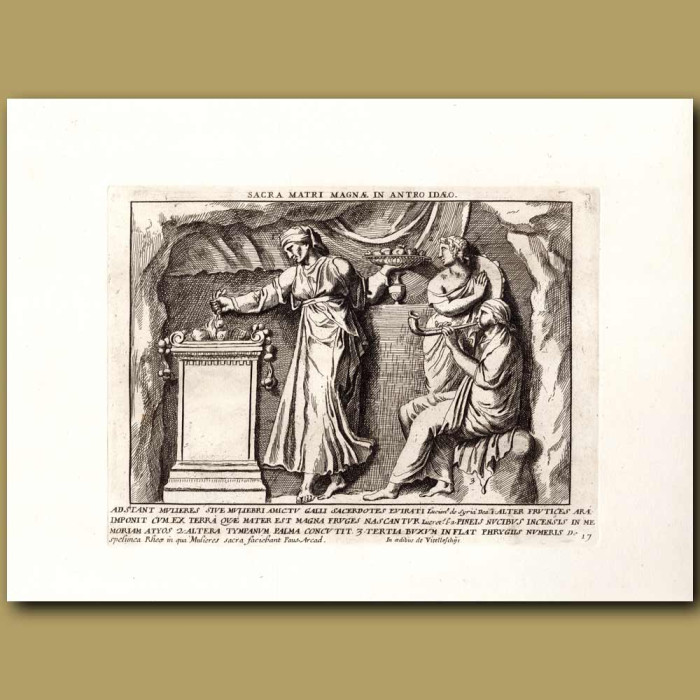 This is a large copperplate engraving, made in 1693 by Pietro Santi Bartoli. It was made on heavy weight,hand-made, chain-linked paper made from cotton. The engraving is on one side, the other side is blank. This is a genuine antique print, not a reproduction. It is in very good condition, remarkable considering it is over 320 years old. The paper is subtle creamy white (less bright than shown in the scan). The white border around the image is larger than shown as the print was too big for our scanner. There is a trace of foxing predominantly at the edges of the paper.

Bartoli was born in 1635 and died in Rome in 1700. He was a pupil of Poussin and is renowned for his engravings of Roman antiquities. He was responsible for several wonderful works on Roman sculpture and art, such as Admiranda Romanarum Antiquitatum of 1693, which is the source of this engraving. This work is a set of engravings of beautiful decorations found on ancient urns, vases, sarcophagi, wall paintings, tablets and monuments from almost thirty sites in Rome. Bartoli's engravings, and his notes engraved under many of them, were an important reference for Renaissance and later artists.
The beauty and elegance of these rare engravings is quite exceptional. They have a timeless quality, look magnificent framed and will become an increasingly valuable heirloom. We enjoyed attempting to translate enough of the Latin title of each print to give a sense of what it is depicting. Scholars of ancient Rome and Latin are also likely to enjoy the challenge of deciphering the rest of the Latin found on most of the prints.