Aristoeus Compels Proteus To Give His Responses 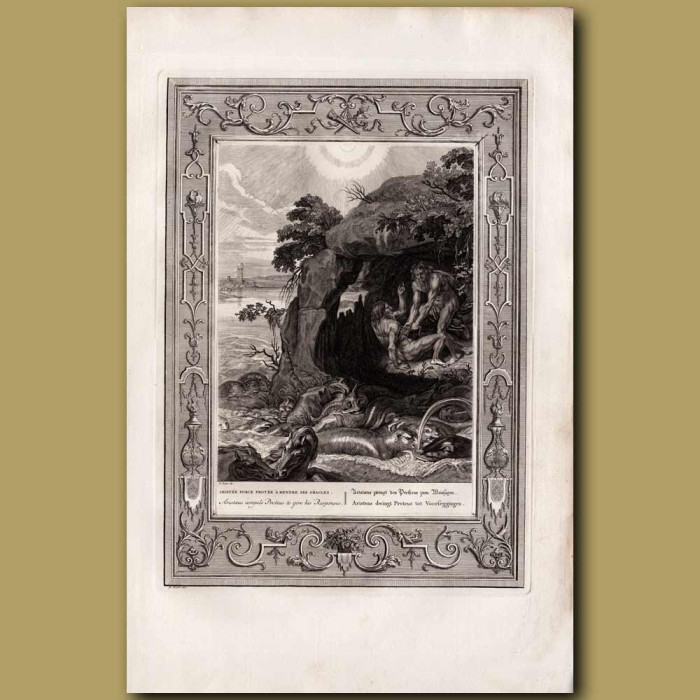 Aristoeus Compels Proteus To Give His Responses
US$125.00
Add to Cart
Buy Now Ask Question
Add to Wish List

48.5 x 32 cm (19.1 x 12.6 inches).
Aristoeus Compels Proteus To Give His Responses
This spectacular baroque engraving is from Bernard Picart's Le Temple Des Muses.
The engraving was made in 1733, is from the first edition and is an original antique. It has captions in French, English, German, and Dutch.
It is in very good condition for its age.
In Greek mythology Proteus is a god of of sea and rivers. He can foretell the future, but changes his shape to avoid doing so. He only answers to those who capture him. One day the bees of Aristaeus died. Proteus could tell him how to prevent this in future, but only if compelled. Aristaeus had to seize Proteus and hold him, no matter what he would change into. Aristaeus succeeded. Proteus told him the bees' death was a punishment for the death of Eurydice. Aristaeus needed to sacrifice 12 animals to the gods. Aristaeus found a new swarm of bees in one of the carcasses. The bees were always healthy. In this superb engraving by Bernard Picart, Aristaeus captures Proteus in a sea cave while sea monsters writhe on the shore.