Oeneus, King Of Calydon, Having Neglected Diana In A Sacrifice, Is Punished For His Impiety 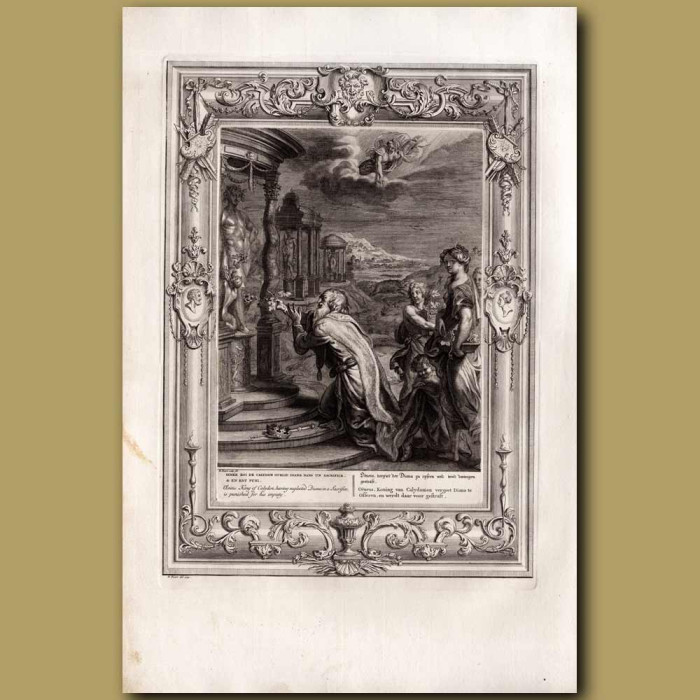 Oeneus, King Of Calydon, Having Neglected Diana In A Sacrifice, Is Punished For His Impiety
US$195.00
Add to Cart
Buy Now Ask Question
Add to Wish List

48.5 x 32 cm (19.1 x 12.6 inches).
Oeneus, King Of Calydon, Having Neglected Diana In A Sacrifice, Is Punished For His Impiety
This spectacular baroque engraving is from Bernard Picart's Le Temple Des Muses.
The engraving was made in 1733, is from the first edition and is an original antique. It has captions in French, English, German, and Dutch.
It is in very good condition for its age.
In Greek myth, Artemis (Diana) is the goddess of hunting and is not to be crossed. Oeneus was a king known for wine-making. According to Ovid, Oeneus forgot to offer the first grapes of his harvest to Diana. As punishment, she sent a giant boar to ruin his lands.In this superb engraving by Bernard Picart, Oeneus is offering grapes at a temple and begging for forgiveness. Diana looks on from the clouds, pointing at the immense wild boar. The ornate border features Diana's bow and arrows.