Pan Pursues Syrinx: She Is Metamorphosed Into A Reed, 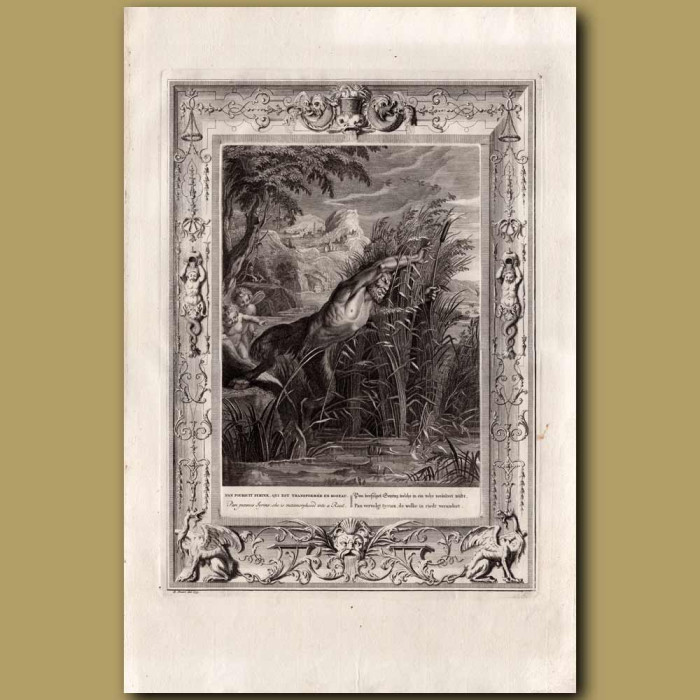 Pan Pursues Syrinx: She Is Metamorphosed Into A Reed,
US$195.00
Add to Cart
Buy Now Ask Question
Add to Wish List

48.5 x 32 cm (19.1 x 12.6 inches).
Pan Pursues Syrinx: She Is Metamorphosed Into A Reed,
This spectacular baroque engraving is from Bernard Picart's Le Temple Des Muses.
The engraving was made in 1733, is from the first edition and is an original antique. It has captions in French, English, German, and Dutch.
It is in very good condition for its age.
In Greek mythology, Pan is the god of the wild, shepherds and flocks, rustic music and and companion of the nymphs. Syrinx was a lovely Arcadian water nymph. Pursued by lustful Pan, she hid in a river and prayed to be transformed into a reed. Her prayer was granted. When the wind blew through the reeds, it produced a plaintive melody. Pan was infatuated.. He could not identify which reed she had become, so he cut seven pieces, joined them side by side, and formed the musical instrument known as pan pipes.